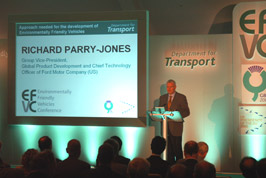 As Chief Technical Officer, he is responsible to the company’s Board of Directors on all technical matters. Parry-Jones heads Ford's technical staff of some 30,000 engineers, scientists, designers and business professionals in North America, Europe, Latin America and the Asia-Pacific region, including the Ford, Lincoln, Jaguar, Volvo, Land Rover, and Aston Martin brands. He also is responsible for product safety and environmental initiatives.

Parry-Jones also serves as a visiting professor within the Department of Aeronautical and Automotive Engineering at England’s Loughborough University, a position to which he was appointed on Oct. 17, 2001.

Equally passionate about customer satisfaction, Parry-Jones is helping Ford teams drive consumer insight and quality initiatives through the product engineering process to deliver cars and trucks with improved initial quality, longrange durability, technological innovation and the surprise-and-delight features that anticipate the wants and needs of customers.

He was named group vice president, Global Product Development, on Jan. 1, 1998, and appointed Chief Technical Officer by the Board of Directors on Aug. 1, 2001. He was named as the senior executive for Mazda oversight on Nov. 15, 2001.

From May 1994 to December 1997, Parry-Jones was vice president of the Product Development Group in Europe. Vehicles developed under his direction there include the Ford Focus, Ka, Fiesta, Puma, Mondeo, Cougar and Galaxy.

Born in Wales in 1951, Parry-Jones joined Ford’s Product Development Group in 1969 as an under-graduate trainee. He went on to graduate with a First Class Honours Degree in mechanical engineering from the University of Salford, Manchester, in 1973, then held a number of product roles in Ford's UK operations.

He was appointed Manager of Small Car Programs in 1982 and played a leading role in development of the 1981 European Escort (1981 European Car of the Year) and the introduction of the European Sierra in 1983. He was named Executive Engineer of Ford’s Technological Research in Europe in 1985, before adding responsibility for Vehicle Concepts a year later.

Fluent in both English and German, Parry-Jones’ international experience includes an assignment as Director of Vehicle Concepts Engineering in the United States in 1988, before taking charge of Manufacturing Operations at Ford’s Cologne, Germany, assembly plant in 1990.

Named Chief Engineer for Vehicle Engineering in 1991, Parry-Jones is well known for his expertise in vehicle development, particularly in the area of driving dynamics and refinement, and his professional accomplishments have been widely recognized.

Parry-Jones was named “Man of the Year” in 1994 by the top British publication Autocar and in 1997 by the U.S. magazine Automobile. In 2001 he received the Golden Gear Award for outstanding automotive achievement from the Washington Automotive Press Association and was honoured as Marketing Statesman of the Year by the Sales and Marketing Executives of Detroit.

He is an elected fellow of both the Royal Academy of Engineers and the Institution of Mechanical Engineers. In 1995 he was awarded an honorary doctorate by Loughborough University in recognition of his outstanding contributions to the motor industry and engineering education and training. In 2005 he has been awarded a CBE for services to the automobile industry.