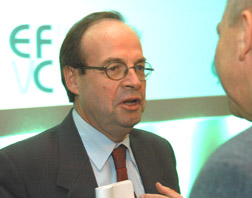 Jean-Martin Folz was born on 11 January 1947 in Strasbourg.

After completing his studies at the Ecole Polytechnique and the Ecole des Mines, he spent one year in Tokyo at the Maison Franco-Japonaise. In 1972, he began his professional career in a local office of the French Ministry of Industry. Between 1975 and 1978, he belonged to various ministerial staffs, and he was appointed Chief of Staff to the Secrétaire d’Etat à l’Industrie.

Between 1984 and 1987 he was CEO of Jeumont-Schneider, a subsidiary of the Schneider group. He was appointed COO of Péchiney in July 1987 and Chairman of Carbone Lorraine.

In 1991 Mr Folz was appointed CEO of Eridania Béghin-Say.

On that same date he also was appointed Chairman of Automobiles Peugeot and Automobiles Citroën.