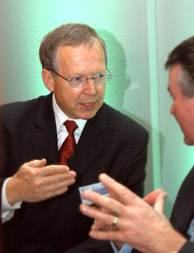 Alan C. Lloyd, Ph.D. was appointed as the Secretary of the California Environmental Protection Agency by Governor Arnold Schwarzenegger in December 2004.

Dr. Lloyd most recently served as the Chairman to the California Air Resources Board appointed by Governor Gray Davis in February 1999 and reappointed by

Governor Arnold Schwarzenegger in August 2004. The Air Resources Board (Board), a branch of the California Environmental Protection Agency, oversees a $150 million budget and a staff of nearly 1,000 employees located in northern and southern California.

As Chairman, Dr. Lloyd was committed to cultivate a mindset and an attitude throughout government, industry and society that zero- and near-zero emission technologies can be put to use now or in the immediate future to help the state meet its air quality goals. He initiated the environmental justice focus within the agency and led the efforts resulting in the adoption of the Environmental Justice Policy and actions to be followed up by the Board.

Dr. Lloyd served as the Executive Director of the Energy and Environmental Engineering Center for the Desert Research Institute at the University and Community College System of Nevada, Reno. Previously, Dr. Lloyd was the chief scientist at the South Coast Air Quality Management District from 1988 to 1996, where he managed the Technology Advancement office that funded publicprivate partnerships to stimulate advanced technologies and cleaner fuels.

Dr. Lloyd has given many presentations to national and international audiences, focusing on the viable future of advanced technology and renewable fuels, with attention to the urban air quality challenges faced by California and to the impact on global climate change. He is a major proponent of alternate fuels, electric drive and fuel cell vehicles eventually leading to a hydrogen economy. Dr. Lloyd has also authored many articles on alternative fuels and air pollution control technology, including Fuel Cells and Air Quality: A California Perspective; Electric Vehicles and Future Air Quality in Los Angeles; Air Quality Management in Los Angeles: Perspectives on Past and Future Emission Control Strategies; and Accelerating Mobile Source Emission Reductions: California's Experience and Recommendations to Developing Counties.

Dr. Lloyd was the 2003 Chairman of the California Fuel Cell Partnership and is a co-founder of the California Stationary Fuel Cell collaborative. He is a past chairman of the U.S. Department of Energy Hydrogen Technical Advisory Panel (HTAP). Dr. Lloyd, 63, earned both his Bachelor of Science in Chemistry and Ph.D. in Gas Kinetics at the University College of Wales, Aberystwyth, U.K.